The Face Of Hip Hop 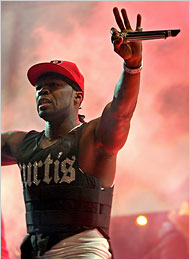 How bad are the numbers? Well, no rapper was more diminished by 2007 than 50 Cent, who challenged Kanye West to a sales battle and lost. His solid but not thrilling recent album, “Curtis” (Shady/Aftermath/Interscope), has sold about 1.2 million copies, according to Nielsen SoundScan; considering that he’s supposed to be the genre’s biggest star, that’s a disaster. (His 2005 album, “The Massacre,” sold more than five million.) In fact “Curtis” has sold about the same as T. I.’s “T. I. vs. T. I. P.” (Atlantic), the underwhelming and underperforming follow-up to his great 2006 album, “King,” which sold about 1.6 million.

50 Cent, above, challenged Kanye West to a sales battle and lost: Mr. West’s “Graduation” has outsold 50 Cent’s “Curtis” by about half a million copies.

This year veterans like Jay-z and Wu-Tang Clan also returned, pleasing old fans but not, for the most part, making new ones. And Lil Wayne released another slew of great mixtapes — available for free download, not for sale. Meanwhile Mr. West’s “Graduation” (Roc-A-Fella/Island Def Jam), which stands at 1.8 million sold and counting, is the only hip-hop album of the year that really seems like a hit, although he loves to portray himself as outside the hip-hop mainstream. Only one problem: After a year when the hitmaker Fabolous and the bohemian Common sold about equally, as did the BET favorite Yung Joc and the indie-rap alumnus Talib Kweli, it’s not clear that there’s still a hip-hop mainstream to be outside.