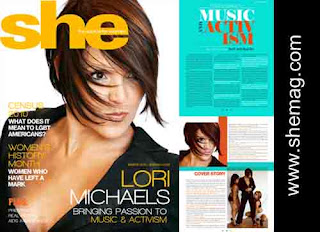 What’s Lori Michaels up to? An easier question would be “what isn’t she up to?” From headlining shows to campaigning for marriage equality to gracing the covers of magazines, Lori has been on the move and making it look easy. This past month Lori Michaels was featured on the cover of She Magazine, Florida’s leading lesbian magazine. The magazine was so popular; copies quickly flew off the tables at the Pride South Florida Festival resulted in the magazine ordering more copies from the printers.

Her hot dance single “Wild Ride” has hit the iTunes Top 30 Dance Charts and the Dance Radio Network Top 40, and she headlined the International LIVE Debut Show at the sold-out Olivia Travel vacation in Ixtapa, Mexico. Be sure to check out Lori Michaels at her upcoming shows!

June 18th, 2010 - Denver, CO. It's "Goddess" night with Lori Michaels during Denver's Pride Fest Weekend where Me & The Girls have been requested to headline the festival that weekend!