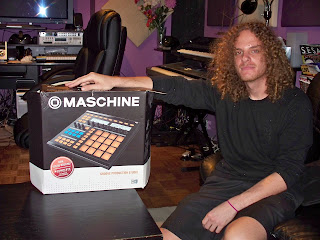 JAMBOX had the opportunity to sit down and talk with DJ Sabri about his work.
How long have you been into music?
I’ve been making beats since I was 15 years old… I’m 24 now, so about 9 years.
What kind of music do you specialize in?
I definitely specialize in hip hop; I also do dubstep and house music. But I mostly do hip hop.
Who are your musical influences?
I grew up listening to Biggie, Tupac, and Eminem, and nowadays it’s Jay-Z. He’s probably one of my biggest influences.
Where do you see yourself in the music business?
Hopefully, a successful producer and beat maker.  I want to be my own producer; who’s out there with his own style.
Can you tell us more about what happened Wednesday night?
It was a producer’s showcase, where over 100 of NYC’s top producers applied and only 15 were chosen, I was one of them. So each producer went up and showcased about 5 beats each and the judges rated them. The judges included Tony G from G-Unit, Mr. Devine, who has worked with Fabolous and Jadakiss, and Vinny Idol who has worked with Sheek Louch, Styles, and D-Block.
Posted by JAMBOX at 1:42 PM