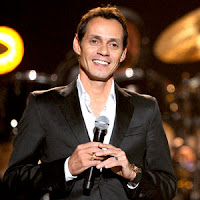 Lee Evans founder and CEO of JAMBOX Entertainment Studios, at Lee's home studio in the Bronx. The initial idea was to create a young brother/sister duo with his younger sister Yolanda, then only 11 years old. Lee didn't think it was such a good idea overall, so he worked solo with Marc. They went on to record the quick demo together entitled “So in Love”, written by Lee Evans. They also recorded other demos with the aid of then popular Latin Freestyle artist 'Safire'. who was enjoying her own success with her song "Boy I've Been Told". Lee Evan’s who at the time was working with some notable freestyle artists such as 'The Cover Girls', Cyre, TKA, stated, “ Marc was one of the most super talented and quickest vocalists I’ve ever worked with”.
Latin superstar Marc Anthony is a talented singer, songwriter, and actor who made his mark through his Latin, and salsa-inspired music. Born on September 16, 1968 in New York City. Marc Anthony realized he has a distinguished singing voice at a young age and had the dedication to achieve greatness. At the age of 14 he was sent by Dave Maldonado Management Agency to work with music producer,

Soon after, Marc Anthony left the Latin freestyle genre to record Salsa and Latin styles of music.This is where Anthony became one of the top selling tropical salsa artists of all time. The two-time Grammy and five-time Latin Grammy winner has sold more than 12 million albums worldwide. He is best known for his Latin salsa numbers and ballads.  He crossed back over to the American market with his heart-stopping hit "I need To Know".

Check out the rare demo recording from the early days of Marc Anthony 'So In Love' here:
https://youtu.be/tkb7OiGyHTs


Go check us out on our social media sites below: