AKEJU AKA. (B CLAY) RELEASES “MOST HIGH” FEATURING ALEXIS LAYNE 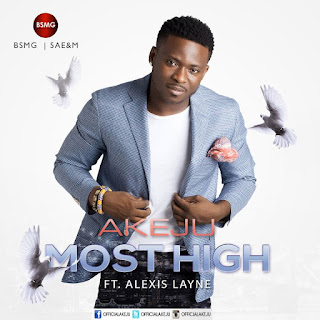 On February 25, 2016, Akeju better known as B-Clay is making a big impact in the music industry with his new hit "Most High" featuring very talented Alexis Layne under the Black Speech Media Group label.

The single "Most High" draws upon inspirational elements of dance-hall, reggae, and afrobeat. The song pays respect to upbringing in Ghana.

Since joining JAMBOX Entertainment Studios family in 2011, Akeju continues to show his dedication towards his writing and music. Lee Evans, CEO of JAMBOX Entertainment Studios stated "B-Clay is a talented and definitely going places." Akeju has performed at "Africa Unites Tour” in South Africa, “Save Africa Concert Foundation” at the Apollo Theater in New York City, and “The Art of Speech for Humanity Concert” in London. Recently, he worked on Voices of African Mothers for United Nations.

Akeju stated, "To be able to use my talent to celebrate and honor my upbringing is a gift I cherish." Akeju is very closely connected to his heritage and continues to show this in his new hit "Most High."
Vocals recorded @ JAMBOX Entertainment. He wishes to express his gratitude to his culture and the support of all his fans, worldwide.  From your JAMBOX Entertainment family, we wish you the best success in your future.